This month at our children's shelter and still at the foundation premises in uganda , one of our children being taken care of has his birthday celebration for the first time in his life , due to the covid19 regulations against partys or celebrations , by the support of his sponsor from germany , Bashi managed to feel the utmost joy of celebrating his birthday and it was a blessing that some of the children at the foundation celebrated with him as our WDF family , or rather Wama family . its the smile on his face that explains everything.

long live Bashi and God bless you to become who you wish to be in this life .

Raakib was infected with corona virus after the foundation corona virus test at the foundation in Uganda , Due to the quicker support and response given , Raakib was taken faster to the hospital and within a week , he was saved because his infection was quicker treated with the possible and available vitamins and other medication .

Thanks to his sponsor and our foundation staffs at the foundation in uganda and both the staffs in Germany . Raakib is fully recovered against Corona virus and recently vaccinated .

Its still a hustle in uganda with the New delta corona virus wave , which is killing almost everyone who hasnt been vaccinated , regardless of which age , the old, the youth and the young ones .

I thank all those who have helped us in making sure that our foundation children were tested and securely monitored on the progress of their healthy. To the few that were found with the virus earlier were sent to the hospital for easy and quick medications.

GOD Bless all the well wishers and supporters who facilitated the progress . and to all our healthy staffs at the foundation , God bless you all at WDF

In a voice of absolute sadness , he answered affirmatively that they drove off with Aisha straight to the hospital . This is when Aisha learned that her dad had got involved in a car accident and was being monitoring in the intensive care unit ( ICU)

Aisha is a daughter to Mr and Mrs Nkedi . A humble family that was blessed with two children . Namulondo Aisha being the eldest now at 12 years of age and Nabirye Shifah at 6 years . Mr Nkedi found someone to be with and to the woman he married , Mr Nkedi was born a disabled man , however due to the graceful and passionate heart and love Mr Nkedi had for her , he married her .

Mr Nkedi was having a small business in the trading centre whereby he was dealing in selling matooke (bananas) and other food stuff which happened to be a source of income to the family . At the moment when Aisha joined primary five , her dad had a car accident as he was heading to Mubende to buy Matooke (Bananas) and due to the tragedy .. Mr Nkedi was unable to skip death , The mother of both Aisha and Shifah is a crippled mother who cant walk or do anything since she was involved in the same accident just like the father of the children

Aisha who is the eldest in the family has been hustling with life ever since the loss of their beloved father inorder to take care of the family little as she is . She has to wake up early in the morning and go fetch water for the neighbourhood to get atleast 200 shillings for each jerrycan. She later heads to town where she moves around selling pancakes and maize most especially during the harvesting season and also does some ploughing on different gardens in the garden so as to meet up the family needs .

And as for Shifah , she had been suffering from marasmus due to scarcity of food and therefore a sufficiency due to lack of certain nutrients however But the grace of God . She is a little bit better.

On behalf of WDF both in Germany and Uganda I humbly request that whoever can reach out to these Children , please your help and time is to be awarded with Great blessings . 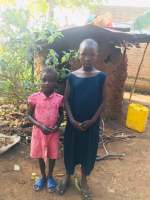 Auma Grace one of our foundation children in Uganda. Appreciates all the people who stood in for her during her critical time of being hospitalized. After a week she got discharged in February and went back home continuously on her monthly medication. She managed to get the asthma inhaler and weekly medication.
On behalf of WDF . I add my voice of thanks to all the people who made it possible to clear her hospital Bills and payment of the continuously monthly medication.
God bless you all with a double financial blessing, health blessing and increasment in all you touch and do. Amen

Giving Back to children like these ones is our fundamental goal as WDF in Uganda.

Previously we shared a clip of where Yasili is sleeps in this grass thatched house with his siblings.  Before they were sleeping on the ground.  But thanks to his sponsor who through the foundation.  Yasili has got a bed and a mattress.

This could weigh little to you but it's a big deal and great joy to Yasili and his siblings and her mother who is a widow left with no one to support her family.

More children like Yasili yearn for support in through the foundation.

God blesses a cheerful giver and with the same measure great doors open.

Today we ask again for help. It is about a little girl, her name is Rania and is 3 years old and suffers from cerebral palsy. She cannot sit, stand or walk. The doctors told us that Rania needs daily physical therapy, speech and occupational therapy, acupuncture and some medications. Right now we have to do acupuncture which costs 1.5 million Uganda shillings (375 euros), physiotherapy 800,000/= (200 euros) depending on where she is, speech and occupational therapy which also costs 600,000/= (150 euros), and the medicines which are not that expensive though. She needs all this for two months at a time. Rania was born normally, but during the birth something happened that even the mother cannot explain.  Rania is retarded and cannot speak.  As a foundation we are looking for support from doctors who know about medical care for this child or have a solution to help us.

Today we received a big call off help from Uganda. The aunt of 3 children asks us for help for the 3 girls of her sister. The sister and her husband both died of HIV/AIDS. She has taken in the girls, but cannot support the school-fees on her own, because she also has a daughter too, who goes to school. We are therefore urgently looking for sponsors for Emily, Cathy and Favor.

With only 30 Euro per month you can help to give a future to one of these children.

We are so thankful for all who stood in to support Auma Grace's treatment Bills paid . She was discharged from the hospital today but still more medication must be bought to her help finish the on going treatment from home. Please feel free to visit our foundation paypal account for her 2 month medicine.

Auma has asthma and we are seeking for some people who can donate inhalers . Sometimes during the hot sun she is affected and when it gets so cold she is also affected in breathing.  We are seeking for 400 euros to fetch her medicine Bill's together with her inhaler.

We are so grateful for the new sponsors that have taken on the mantle to take in new children to support within the foundation.  God bless you all and we believe your continuous support to the vulnerable is a great positive change for their future .

Blessings to you all.